One day, I suddenly got a day off in Kyushu, so I decided to go on a trip. His destination is Beppu in Oita. She loves hot springs, and she’s thrilled to be able to tour the local bars.

I entered the Oita Expressway from the Fukuoka Urban Expressway via the Kyushu Expressway and drove towards Beppu. The weather is fine and it’s a perfect day for a drive.

It’s a familiar road, but the scenery from the train window is rich in nature, and it will make you feel better. There is a car window that I particularly like. After passing the Kusu Interchange, the forest turns into a grassland, and before the Yufuin parking area, a gentle downhill slope begins, followed by a long, mortar-shaped straight line. Mt. Tsurumi and Mt. Yufu continue to Mt. Yufu.

However, the scenery was different then. No, it’s not about something different. From a distance, I could always see grasslands spread out on the green mountain surface, but before I knew it, a black mosaic-like man-made object had spread over a vast area, as if encroaching on the greenery. It lay splendidly in many parts of grasslands and forests.

I’ve been hearing a lot lately. It seems that the loss of forest will cause landslides and floods due to heavy rains.

Furthermore, since solar panels contain hazardous substances such as lead, cadmium, and selenium, they can become another major cause of environmental destruction if they are not treated properly.

In the first place, I wonder if the electricity generated by clearing and destroying the forest is also eco-friendly and SDGs. It is highly questionable whether the political decision-making at the time and the background and policies of the United Nations were fundamentally correct.

On top of that, the system that was created at the time was rough, and the blood tax was responsible for various missing parts. Where will that money disappear along the way? It’s strange.

In the second half of the outbound trip, I was in a deep depression while suppressing my deep resentment.

However, as soon as I entered the Beppu Interchange and headed towards Fukuoka, a luxury category hotel standing on a dark green hill was built in a dignified but quiet way, blending in with nature.

It might have been better for me to jump off the Kiyomizu stage willingly for the future revival of the travel industry, and even more so that I could heal the huge damage in the second half of the outward trip. 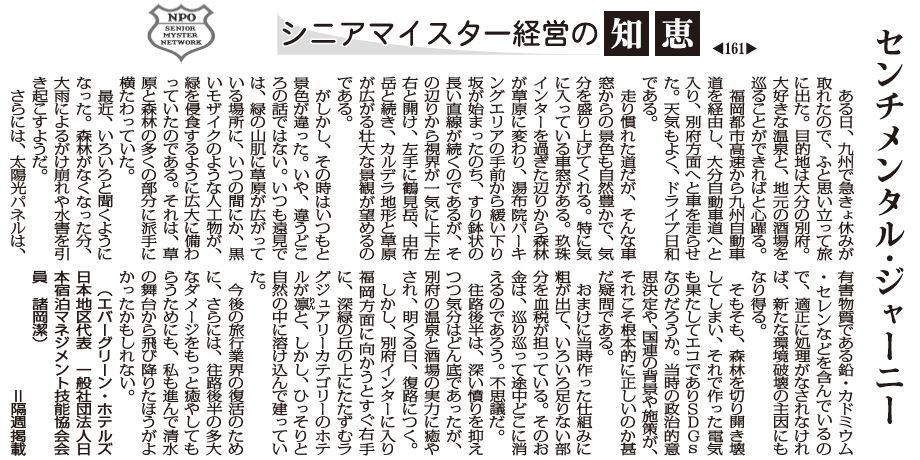