In 1875, the Meiji government promulgated the Education Ordinance, building schools throughout the country so that all citizens could receive an education. At the beginning of the modern education system, the Meiji Restoration government stood up for education that was the cornerstone of the nation. The first Minister of Education was Mori Arinori, who was born in Kagoshima. He was one of the people who secretly sent young people to study in England during the period when the Shimazu clan closed the country, and established the foundation of modern Japan’s educational system.

Since then, 150 years ago, on September 5, 2024, the “150th Anniversary Ceremony of the Educational System” was held at the National Theater in Tokyo.

The event was held with the Emperor and Empress in attendance, taking all possible measures to prevent the spread of the new coronavirus, and taking all possible measures against terrorism. Literally a strict security system, police officers in plain clothes stand out wherever you turn. I feel a little cramped, probably because of the shooting incident of former Prime Minister Shinzo Abe. In addition to the former minister of education, former education bureaucrats and parliamentarians who are called education tribes also attended. Diagonally in front of my seat was Makiko Tanaka, former minister of education.

After Keiko Nagaoka, Minister of Education, gave a speech, His Majesty the Emperor made a speech. “While adapting to changes in the times and society, there is a steady movement toward realizing an education that enables everyone to learn while valuing their individuality, and to maximize the potential of each individual. I look forward to continuing to.” At the outset, His Majesty also spoke about the spread of ICT education.

The third was a congratulatory address by Prime Minister Fumio Kishida. Strangely enough, no one has ever talked about Arinori Mori. It is common for those who have studied pedagogy and history to spend time with Arinori Mori, but I didn’t hear about it. Perhaps it was because Arinori Mori was assassinated in 1889 at the hands of the national framers. He was only 42 years young. I imagined that consideration was given to avoid recalling the incident of former Prime Minister Abe. Arinori Mori studied abroad in the United States after England. His educational thought was influenced by Britain and the United States, which respected freedom.

After participating in this precious ceremony, I realized that such ceremonies should also be held in local governments and should not be limited to the government alone. I think it is also important to reaffirm the foundations of education and to highlight local education and schools, such as by honoring those who have rendered distinguished services in education in the local community. Although commemorative ceremonies are held at elementary and junior high schools, 50-year increments seem too few.

Speaker of the House of Representatives Hiroyuki Hosoda, Speaker of the House of Councilors Hidehisa Otsuji, and Chief Justice Tokura of the Supreme Court gave congratulatory addresses. After all, no one mentioned Arinori Mori, the first Minister of Education. Also, all of them were boring just reading out sentences written on paper. The inside of the hall is a bit bleak, with only high-ranking officials unable to speak in their own words about the importance of school education. Is that what a ceremony is like? All that was saved was that 155 people were commended by the Minister of Education.

The national anthem was played on tape, but due to the corona crisis, it was not possible to sing in unison, and there was no plan suitable for the ceremony, so it ended quietly. Thanks to anti-terrorism measures when entering and leaving, time is consumed. I have never experienced such hypervigilance. An invited but suspected attendee slips through a metal detector. I was a little disappointed when I saw the scene and treatment that I could hardly imagine for the “150th anniversary ceremony of the promulgation of the educational system”.

The good public order is proof that the people are well educated, and Japan has been proud of it to the world. However, I regret that we now have to hold the ceremony in a system similar to that of developing countries.

In order to develop people who love their hometown, it is necessary to create projects that bring people together and entertain them. Bon dances and festivals are good, but I want you to plan various commemorative ceremonies. Humans are animals that have the same habit of gathering together as amoeba. It’s a good way to exchange information and contribute to making friends. You should know that modern society has entered an era in which the planning capabilities of local governments are being called into question. 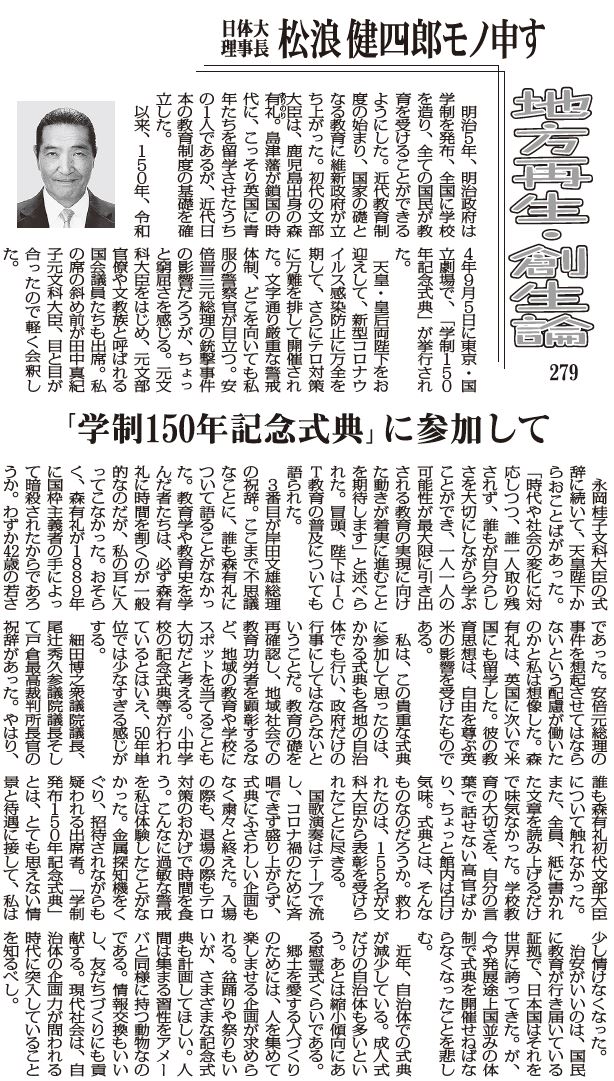