As Mr. Hojo said, “Marketing is one of the elements of DMO,” the association aims to improve the satisfaction of citizens, businesses, and visitors, and expand consumption, based on marketing analysis. By visualizing and disseminating its efforts, they are trying to revamp the traditional business model of the tourism association.

“There are many symbolic things such as Glover Garden, castella, and Dejima, but there are many other charms of Nagasaki that have not been fully conveyed,” says Toyotomi. The city has sorted out the current situation of having many influential players in tourism resources, materials, and the tourism field, and is focusing on “how to work with private business operators to aim for even higher heights.” The Asahi Nagasaki project, which proposes ways to spend the morning, such as Nakashimagawa sea kayaking, is part of this. These are formed and put into practice through cooperation among local business operators.

Asahi Nagasaki started with the opinion that “If you can play in the morning, you should be able to stay the night before.” Various initiatives have been born and implemented from open-minded discussions within the association, which is made up of people from industries other than tourism. We have adopted a process of incorporating each person’s opinions into marketing and classifying them into things that can be done immediately and things that will be started in the future.

The association also pointed to the “high level of tourism administration” as one of Nagasaki’s strengths, stating, “We are working with the city to resolve regional issues while making use of our past experiences.”

In order to promote these movements more strongly, we have also worked on a branding strategy, incorporating the city’s main concept of “‘closeness’ (embracing diversity)” into the slogan “Beside your life, look at the world.” there is “Today, there are many different purposes for tourism and travel. Nagasaki City can propose a variety of stays that meet the needs of each age group and gender. We are focusing on creating a mechanism for doing so,” says Toyoroshi. Based on the branding strategy, the Nagasaki City official tourism website has been greatly redesigned with the visitor’s perspective in mind, and a new site has been systematically edited for food, experiences, and town walks. In order to improve the satisfaction of the city, we will strengthen the acceptance and refinement of local content. In the future, in addition to individuals, the company has announced a policy to further strengthen its appeal to corporations such as MICE and educational trips, and to further strengthen regional management for businesses in the region.

Tourism-related hard and soft improvements have also made great progress. On November 1, last year, the convention hall “Dejima Messe Nagasaki” opened, and the system for accepting MICE was in place. Three days before that, on October 29, the Nagasaki City Dinosaur Museum opened in the Nomozaki district of the city. With the opening of the Shinkansen, the convenience of the area around Nagasaki Station has greatly improved. trying to transform. The association’s “challenging efforts” are about to further accelerate the transformation of Nagasaki City. 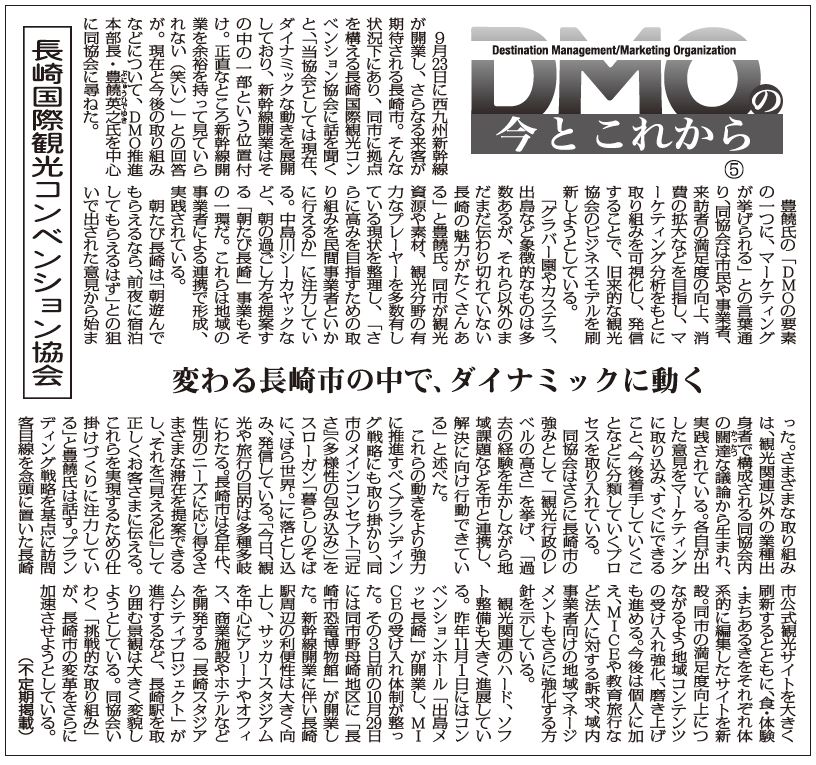