On September 28th, the Review announced the results of a survey on “The most shocking smartphone failure I’ve ever experienced.”

Review Co., Ltd. (https://jafmate.co.jp/) operated by “ahamo” ( https://sublogg.com/ahamo/ ) conducted a questionnaire survey targeting people in their teens and older all over Japan about “the most shocking thing that happened to a smartphone failure so far”.
We will publish the results.

* When quoting the results of this survey, please use the URL of “ahamo” ( https://sublogg.com/ahamo/ ).

When I conducted a survey to find out what was the most shocking thing that happened to me when my smartphone broke down,The first place is “The LCD screen is broken”was.
Others will be introduced in the ranking format. 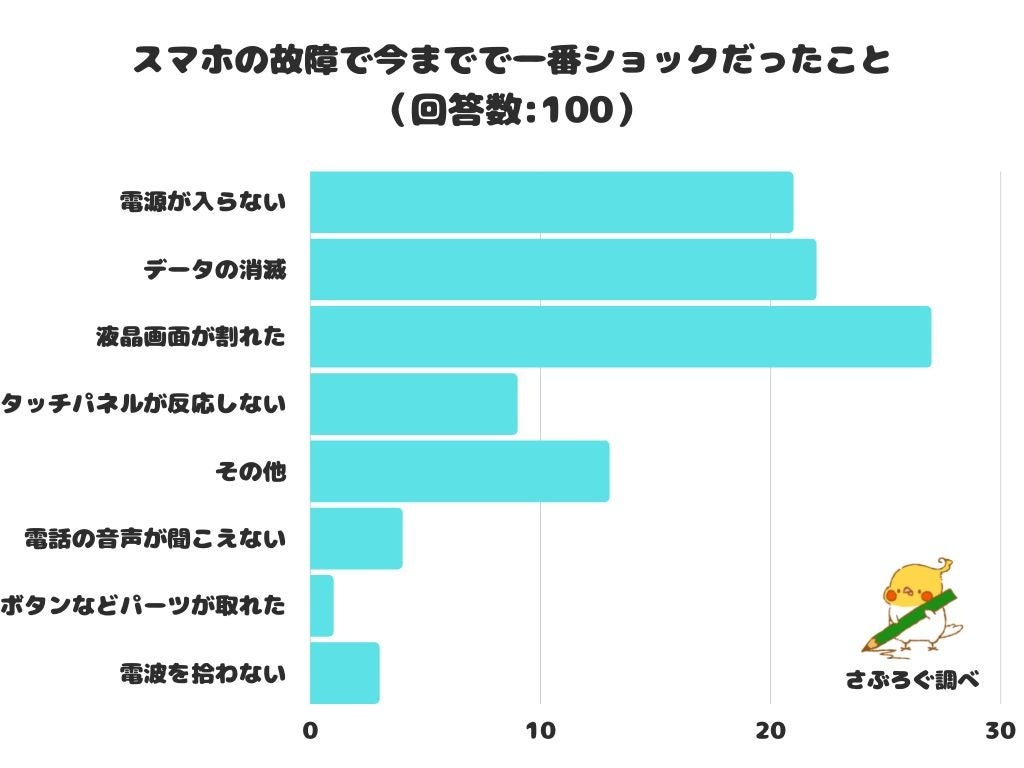 “The LCD screen cracked” ranked first.
After the 2nd place, “data disappearance” and “power does not turn on” continued, and “parts such as buttons came off” came in 7th place.

・When I went to Disneyland with a young girl, I accidentally dropped my smartphone when I was about to take pictures, and the liquid crystal shattered, which was quite a shock. (Male in his 40s)

・I was very worried that water would leak from cracks. Even when she was on the phone, the broken part hit her face and it hurt. Her repair bill is high. (Female in her 30s)

・It’s shocking that the LCD screen cracked, but the fact that it looks bad lowers the tension. Even if I can use the function, I feel the damage (female in her 40s)

The first place is “The LCD screen is cracked”.
You can see that if the LCD screen breaks, not only does it cost money to repair it, but it also causes a lot of mental damage.

・Because of the loss of data, not only SNS such as LINE, but also the data of various games that I worked hard on have disappeared. (Male, 20s)

・I have a lot of memorable data in my smartphone, such as photos and emails I exchanged happily, so when the data disappeared, it was such a shock that I couldn’t get over it. Above all, I used to manage passwords with a notepad on my smartphone, so I had to reissue passwords many times due to data loss, which was very troublesome. (Female in her 30s)

・Several years ago, after updating LINE, I couldn’t start it for some reason, and deleted the LINE app and downloaded it again, but all the data disappeared. I remember being shocked when my friends and acquaintances’ contact information and messages I wanted to leave disappeared. (Female in her 30s)

The second place was “disappearance of data”.
There were many opinions that not only would there be many troubles if the data disappeared, but also that it would be a shock to lose all the memories.

・Anyway, no matter what I did, the power supply wouldn’t come on. I don’t know what’s going on with my phone, and I can’t do anything. Not being able to search is a big deal for people like this. It was a shock both mentally and physically. (Female in her 40s)

・iPhone is used. The battery has become useless, and the apple mark will come out for the rest of my life, and the power will not turn on. Luckily, I remembered my ID and passwords, so all the data did not disappear, but LINE, which I use the most, disappeared. (Male, 20s)

・All data, images, and photos are gone. I became hopeless. The power was about to turn on several times in a suggestive way, but the series of disappearances continued with a series of hopes and despairs. (Female in her 40s)

・The touch panel suddenly stopped working, and the data could not be backed up. Since the power is on, it was inconvenient that I could not return it even if I received a call. I was in trouble because I could not turn off the power. (Female in her 20s)

・In my case, it was a failure that the upper half of the screen could not be touched. I was at a loss as to whether to replace or repair because I could operate it halfway. However, it was difficult to use, and it was a shock even though I had to do it myself because it was caused by the impact of the drop. (Female in her 30s)

・When using the second smartphone, the liquid crystal is alive, but when you touch the menu, it does not respond. I was sad that I could not edit and organize images, and organize recorded programs of 1seg. (Female in her 30s)

・I could hear the other person’s voice, but my voice could not reach them. It is unpleasant that I have made silent calls several times and made the other party feel uncomfortable. (Female in her 40s)

・When I was on the phone, but I couldn’t hear the voice or get connected, I got really impatient. And it broke in the middle. I was horrified and very shocked to think that I would not be able to contact them. I immediately went to the cell phone company. (Female in her 40s)

・Because not being able to hear the voice on the phone meant that the phone function was malfunctioning, and it had a great negative impact on communication with people in the future. (Male, 30s)

・I’m using it at home and other devices are connected without problems, but only my mobile phone can’t connect to wifi at all, probably because the model is old. (Woman in her 50s~)

・It suddenly stopped picking up radio waves, making it impossible to make calls smoothly, and video playback was not clear. I was very annoyed because it’s something I use often. (Female in her 30s)

・I felt really lost because I couldn’t use the discount coupons on the app. It was quite a sum. I have never experienced data loss or cracked LCD screens. If so, the disappearance of the data would be the most shocking. (Female in her 30s)

・I was using an iPhone 4s, and the most shocking thing was that the home button came off. The inside is exposed, so it looks bad and dangerous, and it was inconvenient and painful to push the button with your fingernail. (Female in her 30s)

The 7th place is “parts such as buttons were removed”.
There was an opinion that it would be difficult to use if the parts came off.

・Within less than a week of buying the iPhone 11, which was the latest at the time, the upper part of the camera dropped and broke, resulting in blurry photos. (female teenager)

・When Wi-Fi is no longer available. I dropped it once, and then for some reason I couldn’t use the Wi-Fi function, which was very annoying. The data quickly decreased, and I was shocked that I could not listen to music for a while. (Female in her 30s)

8th place was “Other”.
There were problems such as the camera being broken, Wi-Fi being unusable, and the LCD screen floating.

When I conducted a questionnaire to 100 people,27.0% of the respondents answered that the LCD screen was brokenwas
Also, as a reason for answeringIf the screen cracks, the mental damage is great.the opinion thatexpensive to repairWe received many comments.
It often breaks unexpectedly, and you can see that the shock is great.
How about using it as a reference when your smartphone breaks down?