Many highway buses arrive and depart around Tokyo Station, but there was a problem that the bus stops were scattered. Although there is a bus terminal at the Yaesu South Exit, only some of them, such as the JR line, are in service. Other stops were scattered on the streets of Sotobori-dori, Yaesu-dori, Kajibashi parking lot, etc., and it was difficult for users to understand.

Located in the basement of the redeveloped building “Tokyo Midtown Yaesu”, it is being developed in three stages according to the construction period of the building. This is the 1st season.

It is directly connected to Tokyo Station via an underground mall, and you can reach it in a few minutes on foot from the JR Yaesu Underground Central Exit. The first basement floor is a small dining area, and the bus stop is on the second basement floor. When you get off the escalator, you will find a narrow platform with 3 berths (platforms) on each side. 6 berths in total.

Currently, the scale is small, and to be honest, I have the impression that this is the only one. However, when it is fully opened, it will have 20 berths, and it will be one of the largest bus terminals in Japan, surpassing Busta Shinjuku’s 15 berths.

There are 1,200 highway buses arriving and departing around Tokyo Station per day, of which 550 and 50 new buses, for a total of 600 buses, will be in service. About 60% of the flights are bound for Chiba, and there are also long-distance routes to Kansai, Tokai, and Tohoku.

As for my impression after using it immediately, it seems to be difficult for first-time users to access from Tokyo Station, as it is located on the second basement floor in the back of the underground shopping center. The guidance display of the Yaesu underground mall is insufficient, and this point needs improvement.

Once you arrive, the air-conditioned indoor bus terminal is comfortable. The toilet is a little small, but there is also a convenience store, which is convenient just before departure.

Unfortunately, the waiting space is narrow compared to the scale, and there are only a few benches. With this, you have to be prepared to stand and wait until the bus arrives, and there is no progress from the bus stop on the street.

Long-distance highway bus passengers often arrive early, so the waiting area should be an important facility. I don’t think the number of benches was reduced just to get people to use the restaurant on the first basement floor, so I’d like to expect that the number of benches will be expanded from the second stage onwards. 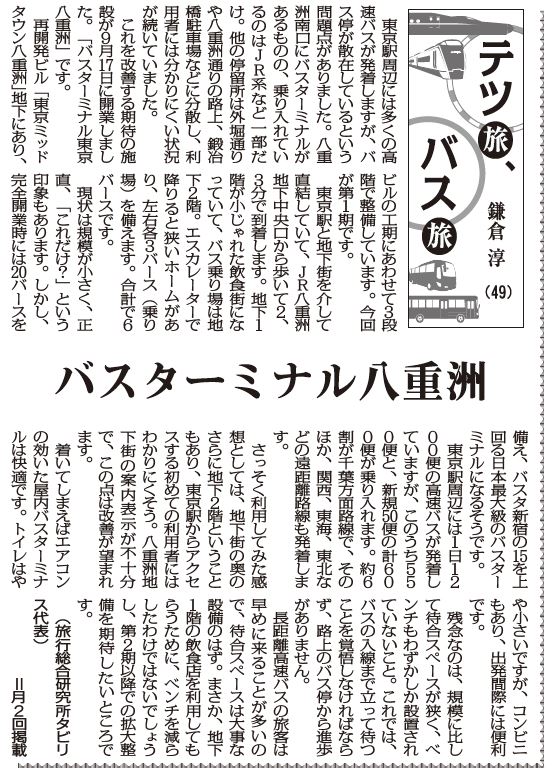 Pos Sebelumnya: Investment in renewable energy will increase with the removal of the foreign ownership cap
Pos Selanjutnya: Konsi is dead in the concrete fence