Kanucha Resort is located in the northern part of the main island of Okinawa, at the gateway to the world heritage site Yanbaru. It is about 60 times the size of Tokyo Dome, and has 9 hotel buildings and villas, a golf course and a clubhouse, various restaurants on a vast site of about 800,000 tsubo. etc. are scattered.

Carts, trolleybuses, and sometimes kickboards can be used to move around the site. Adults can enjoy not only the beach, but also the children’s pool with playground equipment and the garden pool with a poolside bar. All guest rooms are over 50 square meters and come with a jacuzzi.

The late founder Takeharu Shiraishi and his wife Yae Shiraishi have greatly developed the Shiraishi Group, supporting the prefecture’s post-war economy. Mr. Takehiro Shiraishi (current president), who took over the company’s business in the tourism field, has been a strong driver of tourism, which is the leading industry in the prefecture, together with Yoshiro Shimoji, chairman of the OCVB Okinawa Convention and Visitors Bureau, and Yoshikazu Higashi, chairman and president of OTS Okinawa Tourist. I am the only one.

Aiming to become a world-class resort, Okinawa’s pioneering Kanucha Resort has been in business for a quarter of a century. rice field. Due to the influence of Corona, Okinawa is suffering from a serious shortage of rental cars. Mr. Takehiro returned to the post of chairman of the Okinawa Prefecture Rent-A-Car Association and worked hard to improve the situation.

When I visited Kanucha Resort for the first time in a long time with my students and talked to Mr. Joji Arakaki of the general affairs department, I learned that they are using the crisis of COVID-19 as an opportunity to manage aggressively.

We introduced AI to sales and marketing to improve efficiency, and opened a nursery school for employees on the premises. A co-working space with a capacity of 20 people has been set up, and there is also a clinic where health checks can be performed. In addition, the resort amusement lounge “LUPiNUS” will open in June 2022, and Yogibo will provide comfort to the “Morinaka Secret Base” inspired by the forest of Yanbaru. We also worked on creating a place that is not affected by the weather, such as a simulation golf with a bar and a darts field.

A new church will be built for resort weddings, separate from the existing wedding chapel. Winter traditions and illuminations were ahead of the times, starting in 1999. In terms of environmental issues, the company is also active in SDGs, such as obtaining prefecturally certified CO2 emissions credits for its palm tree planting business.

Kanucha Resort is just a stone’s throw from Henoko, which is shaken by the base issue. Around Camp Schwab, people were seen carrying placards. Denny Tamaki has just been re-elected in the Okinawa prefectural gubernatorial election last September. It is worrisome that an AI analysis of the speeches reported by NHK after the announcement of the gubernatorial election revealed that the word “tourism” was hardly included in the words spoken by the candidates. Before seeking a local economy that does not rely on tourism, it is important to show a concrete path for how to restore tourism as an existing industry.

Takehiro says. The slogan of the people who work here is “ATM”. It seems to mean bright, fun, and positive. It is this spirit that represents the current state of tourism in Okinawa. 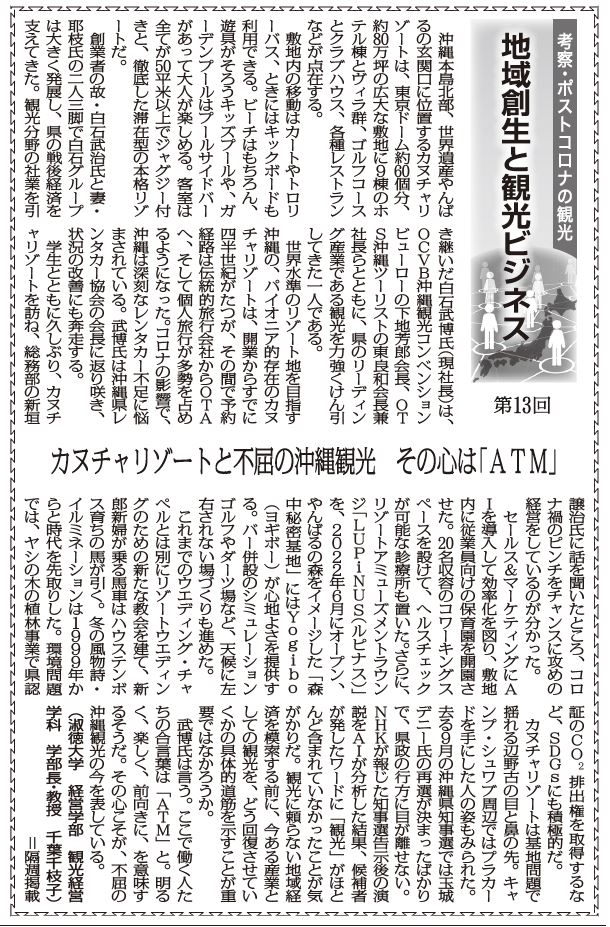 Pos Sebelumnya: Strengthening the relationship between New Zealand and India
Pos Selanjutnya: PBBM is tight-lipped on the 3 personalities chosen as the new Press Sec.