It’s been a long time since I’ve been fascinated by the melody of trains arriving and departing at stations, the so-called “station melody”. There are quite a few cases where a melody related to the area is realized through the enthusiasm of the local people and other stakeholders. The process is the story of regional revitalization itself. As a newspaper reporter and as a freelance journalist, I have written several “Eki Melo Monogatari”, but perhaps the most impressive one is “Aobajo Koi Uta” at JR Sendai Station. Probably JR’s oldest “station melody” begins here.

In the first place, “station melody” seems to be unique to Japan. Overseas, trains take off and land without annunciation of the bell, and the trains begin to glide smoothly. On the other hand, Japanese timetables are strictly in seconds, and the departure bell has been used. According to one theory, it began in Tokyo around the time of the privatization of the National Railways in 1987 as part of a review of customer service. There may have been an idea to reduce the rush to get on with music instead of inorganic bells.

But Sendai Station’s “Aobajo Koiuta” is even older. Muneyuki Sato, a musician based in Sendai, made his debut in May 1978 with this song that he composed himself. At that time, at the former Sendai Station of the Japanese National Railways, this record was played as the “station melody” when the limited express “Hibari” that ran between Tokyo and Sendai arrived. It was also used as background music on the premises, and when Sato participated in the New Year’s Eve song contest that year, he played it all night long. Mr. Haruo Yoneyama (deceased), who was the head of Sendai Station at the time, called the head office to support Mr. Sato. It is unusual for JNR to keep playing a specific song on the premises. “It was a wise decision, and I am grateful,” recalled Mr. Sato. As a result, the song became a hit, selling more than 1 million records.

This song is based on the lyrics sent to the radio program where Mr. Sato was a DJ. Musician Mitsuhiro Sakakibara was the assistant pianist at that time. When Mr. Sato sang it on a program, there was a big response and the major debut was decided. In 1988, “Aobajo Koiuta”, arranged and performed by Mr. Sakakibara, became the departure melody for the JR Senseki Line, and the following year it was also used on the Shinkansen platforms. Since 2016, live performances by the Sendai Philharmonic Orchestra have been playing on Shinkansen platforms. Supervised by Mr. Sakakibara. After the Great East Japan Earthquake in 2011, the idea of ​​​​recovering with the whole community is included.

The fact that the song is used as the station departure melody is proof that it is a standard song. “Aobajo Koiuta” has become a song that is synonymous with Sendai, and for both Sato and Sakakibara, it has become an artist’s happy work. I would like to make it my life work to unearth the “station melody stories” nationwide that are still buried.

Shihoko Fujisawa(Shihoko Fujisawa) Journalist, former National Newspaper Economic Department Ministry of Land, Infrastructure, Transport and Tourism cap. Dropped out of Waseda University Graduate School of Letters majoring in theater. She has been a visiting researcher at Columbia University Graduate School, a part-time lecturer at the Open University of Japan (media theory), and a commentator at Akita Television (Fuji Television). His publications include “Promotion and Title” (Shincho Shinsho) and “Tsurikichi Sanpei no Yume Yaguchi Takao Gaiden” (Sekaibunkasha). 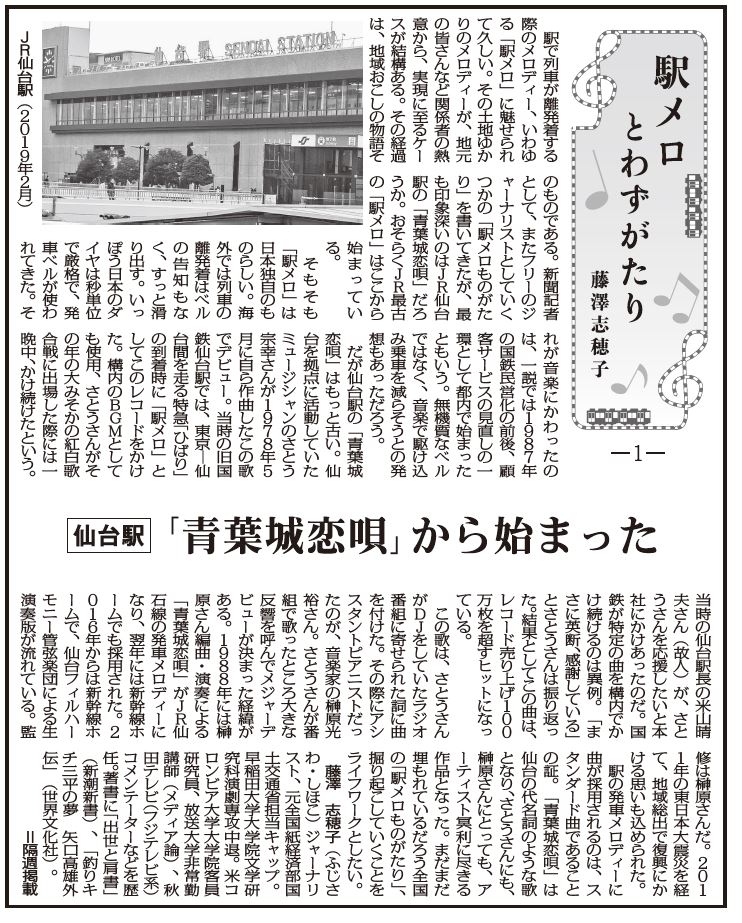