Queen Elizabeth of England died on September 8th at the age of 96. The Queen ascended to the throne in 1952 at the age of 25, and was crowned in Westminster Abbey on 2 June 1953. I was seven years old at the time, but for some reason I remember the coronation ceremony vividly.

The reason is that the coronation ceremony was broadcast on television. In Japan, NHK started broadcasting on February 1, 1953, and my father worked hard to buy me a 7-inch TV, so I became a TV kid and didn’t understand why. I remember watching the news of the coronation with great interest.

The Queen reigned for 70 years and 7 months, the longest in British history, and was admired by the public as the “Mother of England.” Her state funeral was held at Westminster Abbey on September 19, attended by dignitaries from around the world. Their Majesties the Emperor and Empress, U.S. President Biden, German and French presidents, and other dignitaries from all over the world attended, and more than 10,000 police officers, the largest number in history, guarded the ceremony.

On top of that, Canadian Prime Minister Justin Trudeau, who was the only G7 leader scheduled to visit Japan, canceled his visit to the state funeral, citing hurricane damage. As far as the attendance of dignitaries around the world is compared, it seems that it will be a lonely state funeral.

By the time of Churchill’s state funeral, the UK was already suffering from secular stagnation, known as the “British Disease” (increasing social security burden, declining people’s willingness to work, intensifying labor disputes, declining international competitiveness, economic growth). ) was occurring. After that, through the neo-liberal reforms by Iron Chancellor Thatcher and the “New Labor Third Way” reforms by Prime Minister Tony Blair, efforts were made to overcome the British disease.

On the other hand, in Japan, after the funeral of Shigeru Yoshida, efforts were made to achieve rapid economic growth based on an industrial and trading nation, which was a great success. After the collapse of the bubble economy in the early 1990s, structural reforms focused on deregulation, fiscal stimulus, and monetary easing were implemented, but Japan’s GDP and wage levels have hardly changed over the past 30 years.

Before the corona crisis, the world’s intellectuals had already diagnosed Japan’s 30-year long-term stagnation and decline as “Japan Disease,” but leaders in various fields in Japan began to seek treatment for pathological symptoms. didn’t go On the occasion of the recent Japanese-British funeral, I am once again deeply concerned about the “Japanese disease.”

The tourism industry also needs to think about measures to promote tourism while keeping Japan disease in mind. 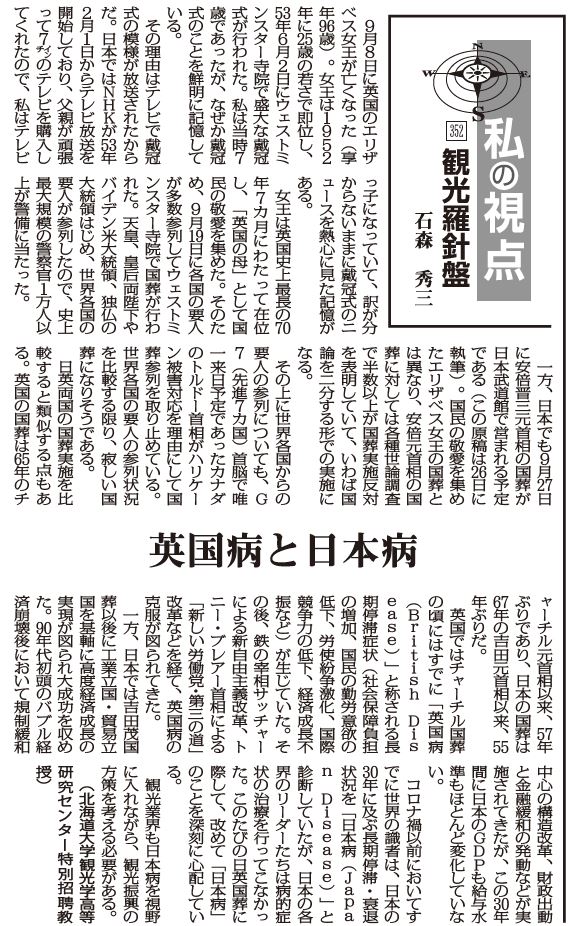 Pos Sebelumnya: Visa cancellation of more than 48,000 POGO workers, already processed
Pos Selanjutnya: Yoon Seok-yeol “Reports that are not true, damage the alliance” Democrats apologize to the public and push for the dismissal of Park Jin