JTB Publishing announced on September 20 that it has opened a digital area guide “Smart Rurubu Kamakura” exclusively for smartphones. 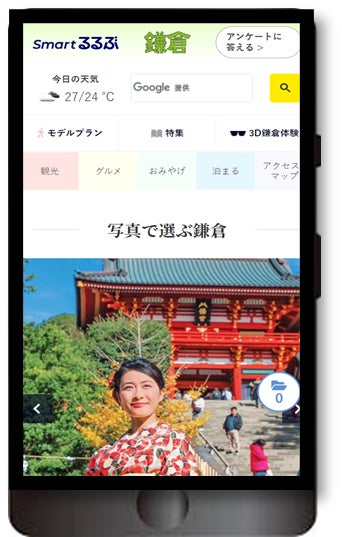 ■ What is “Smart Rurubu Kamakura”?

“Smart Rurubu Kamakura” is a smartphone site created by the travel guidebook “Rurubu”. In addition to popular articles on “Rurubu Kamakura” and the website “Rurubu & more.” Functionality is available.

With the “AI model plan”, AI (artificial intelligence) automatically proposes a model course that suits the user by entering the travel style, number of people, starting point and transportation method. It is also possible to change a part of the completed course to a spot that the user is interested in, or set the theme in detail to further customize it to your liking.
The personalization function is a convenient service that automatically sorts the spots that users have added to their favorites and proposes efficient courses.

“Smart Rurubu” is a media that not only transmits travel information but also challenges to solve regional issues. Kamakura has a chronic problem of overtourism, in which tourists concentrate in certain areas during the busy season and during the day. Therefore, “Smart Rurubu Kamakura” disseminates information on hidden spots to avoid congestion, and cooperates with local tourism associations to disseminate information from the region in a timely manner. We aim to create fans who are deeply attached to.

We conducted a survey of users in their 20s to 60s about the overall service and usability of “Smart Rurubu Kamakura”.

17.3% of respondents said that they were “attracted” and 35.1% said that they were “somewhat attractive” to “get information linked to SNS and current affairs information such as local news”, exceeding half of the total. . In addition, about half of the users who answered that “I want to go a little stronger” and “I want to go” about the function “I can see notifications from Kamakura” and “Twitter useful for sightseeing are displayed”. , it is thought that there is a certain demand for dissemination of information originating from the local area.